Live quests are not held in San Francisco temporarily. We are looking for a new partner

Do you want to open Questoria in your city? Terms.

What Happens at the Questoria?

(Feedback from our player)

I went to play the «Flint’s Will» Questoria and cannot wait to share my impressions.

I went to the cafe, got to the table, introduced myself to everone. The host assigned the characters based on the players’ wishes. Now the mystery began: everyone was given an envelope, the room was quiet but for the sound of the ruffle of paper.

Opening the envelope is like unwrapping your birthday present. Besides the role description, you get to know about all your character’s artifacts, his skills, and the story of his life — colorful and captivating all at once. And suddenly, regular people turn into wicked goons, wild aboriginals, beauties captured by the pirates and knightly heroes ready to save these beauties. And damn, I suddenly realise that I too am no longer myself, but instead the ruthless captain «Black» Jack McKraken! 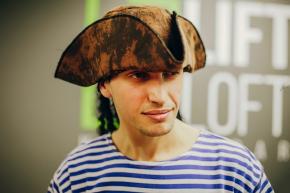 The game starts like a sudden typhoon from the ocean, suddenly the whole room is full of mysteries, schemes, betrayals and unexpected allies. The players jumped right into action. I won’t dwell on the details here, as I probably shouldn’t give away all the secrets! I can only say that in two hours’ time «Black» Jack McKraken was betrayed by his crew, made himself an enemy of the noble Don Diego, got taken to an aboriginal tribe’s fire, but escaped, stole some treasure, killed his lifelong competitor, took his revenge upon Don Diego, got himself a pardon from the governor and sailed away from the darned island with a new crew!!! 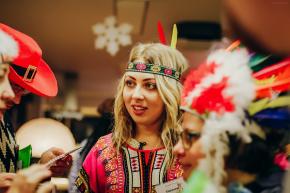 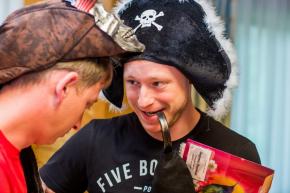 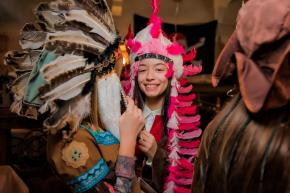 The biggest moment was when the aboriginals seized Jack, tied him to a column and started the fire. Even though it’s just a game, and there have been no ropes (let alone a fire!), you still have a feeling that your feet get hot! Your precious ‘artefacts’ are taken away, the shaman character is dancing around in praise of his little tribal gods, and the character Nancy and her crew are standing there watching. You have nothing to lose and you start cursing everyone, especially Don Diego, a strong Catholic, who is cheering all this heresy on.

Suprisingly, that worked! Apparently, they decided that only someone who had some very precious piece of information could have cursed like that, and almost got into a fight trying to pull me off the fire! And that was a mistake, for as soon as he had his feet back on the ground, Jack knew what he would be doing, who he would trust and who he would ditch as soon as possible. 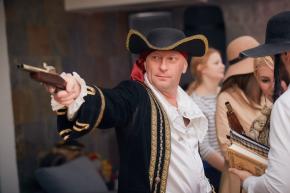 So, the game is over, and we are sitting at the tables, having our meal and sharing our impressions. And that is the second amazing moment! At the very end, all the secrets and mysteries are revealed, and I realize, that all this time I have seen just the tip of the iceberg — three dozen other things have happened in the same game over the same two hours, and I have not even noticed. Finally, we start to say goodbyes, but the emotions and impressions from this great game still stir up my mind, and make me write it all down for you. 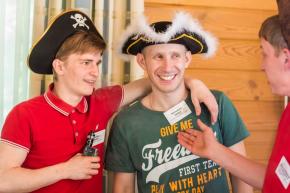 Can’t find your city on the list? You can start a business with us. Terms and Conditions
Book a place on the game
Leave your contacts, and we will offer you a convenient option
+1 (941) 840-0982
How to Reach You
Looking for a partner
Questoria in San Francisco is temporarily closed. We are looking for a new partner

I want to play in another city

Is your city San Francisco?
We play questories in 67 cities worldwide
Yes
Change Location
Consent to the processing of personal data
Hereby, I give to Questoria LLC. (PSRN 1097847328480, TIN 7801507148, address: 35 Korablestroiteley street, apt. 389, St. Petersburg, 199397, Russia including its employees and persons acting based on the civil law contract with it / persons authorized by it, my consent to the processing of my personal data, namely: last name, all given names and patronymic, telephone number, e-mail address, date of birth , and host city, for the purpose of individual communication with me on issues related to:
— my participation in the story role game «Questoria»;
— consulting me in connection with the possible conclusion of an agreement with Questoria LLC, the subsequent conclusion of the contract and its administration;
— the quality control of the services provided by the employees of Questoria LLC and its counterparties;
— sending me information mail by Questoria LLC, containing information about new services, company news, marketing offers, and other information for clients of Questoria LLC.

I give permission to carry out all actions with my personal data, including collection, recording, systematization, accumulation, storage, clarification (updating, modification), extraction, use, transfer, depersonalization, blocking, deletion, destruction, processing for inclusion in lists and electronic databases, not using any automated means and using any automated means.
Questoria LLC can process my personal data within ten years from the date of their receipt.
I am aware that the consent to process my personal data may be withdrawn at any time based on a written application prepared in any format, which must be sent to Questoria LLC by registered mail with recorded delivery. In this case, my personal data will be deleted within three working days from the date of receipt of my application by Questoria LLC.
If you want to refuse receiving mails from our regular mailing list, you can do this at any time visiting a special link located at the end of each letter.
To contact the site administrator for any questions, you can write an e-mail to: site@questoria.com

Send your request in San Francisco