NO to the Bullshit Team Bonding Trend! Let’s Star in a Movie!

Квестория в San Francisco
The end of the financial quarter is approaching, which means that the usual “exciting” email from the HR department arrives our inbox. It says that we all worked hard and deserve to go offsite to bond, re-engage and, yet again, work as a team to solve engaging issues created by god-knows-who.

Two things pop up in my mind while skimming through these messages:

First of all, wasn’t there enough engagement, collaboration, and bonding throughout the quarter to solve your company’s business goals? Apparently not. Now they want us to do more of the same by jumping in sacks, escaping rooms, going on treasure hunts, and baking sticky chocolate. To me, it feels like a constant training of monkeys programmed to work together.

My second thought has at this point, become a developed reflex. Hmm, let me check how many vacation days I have. There’s a chance I can get away with opting-out of this “nice” upcoming team event. Great! Typing a message to the boss that I’m not in.

The picture below very well describes how I view these team building activities. Sounds familiar? Then clap, clap and… keep clapping this post.

There is nothing wrong me with me (or with you, if you clapped this post)! I’m not anti-social and I usually look forward to meaningful networking activities and events. But there is something wrong with all these trendy team-building options. They are obsessed with an idea of impersonal bonding and work-as-a-team tasks.

All I want is to be a person who talks, thinks and acts the way he lives and likes at these seldomly informal team events, which is why a visit to a nearby bar is my go-to team-building activity :)

Surprisingly, a few days ago we played the Questoria thing that just might change this rotten trend of team building events, and could even morph them into something that develops personality rather than trains monkeys to work together as a team.

So, here is some quick, dry feedback on Questoria and I’ll let you check it on your own.

Become the cast of a movie story

In Questoria game you have the chance to try out the role of a different human being with all of his or her skills, knowledge, aims and destiny. Your goal is to immerse yourself into a given role, to become that personality and to behave like an actor

To give you a better sense of the concept, recall Quentin Tarantino’s western film, The Hateful Eight, in which a group of reckless and outrageous characters are locked together in a tavern.

Every one of Tarantino’s personalities chases his or her goals, and bluffs and acts their way to survival.

It turns out that Questoria scenarios are very similar. We played the Wild West story that is reminiscent of The Hateful Eight.The difference is in the plot and the list of characters. The Wild West story features not only a sheriff, cowboys, and gunslingers but brings in the roles of Mexican traders, Native American leaders, ranch owners and various townspeople. The similarity is that the characters are distributed among a cast, which is you and your buddies, and everyone is on their own.

A couple of images from that Questoria game. First… 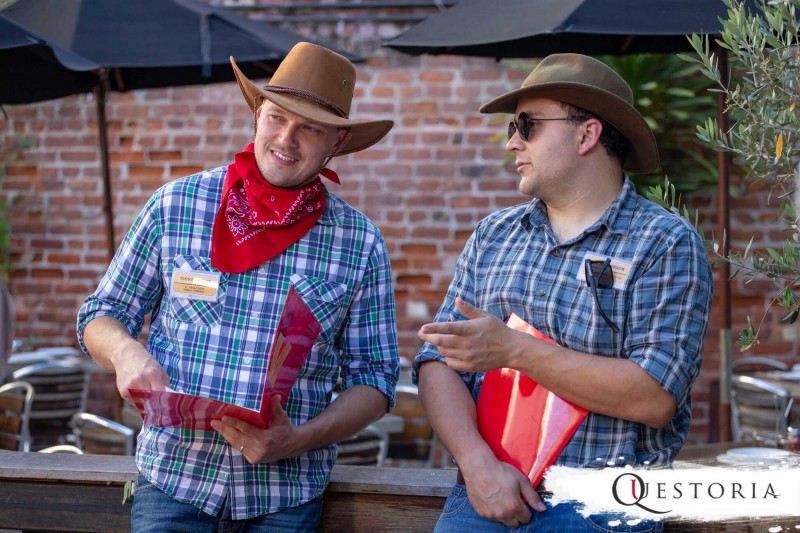 And I’ll leave you to check out this promising development in live games for yourself!